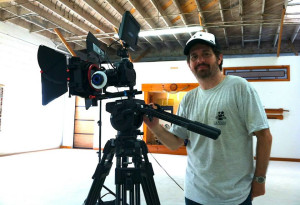 Matthew started his career in New York City, after attending the prestigious Purchase School of the Arts, where he studied filmmaking and writing. He went on to write and direct his first feature, “Desperation Highway,” a psychological thriller, distributed by First Miracle Pictures.

Ross moved to LA and wrote and directed his award-winning short, “Food for Thought,” nominated for the Palme D’or at the 52nd annual Cannes Film Festival and appearing at the Palm Springs Film Festival and festivals around the world.

During that time, Ross landed a position as an EPK editor for SONY Pictures, where he created impressive electronic press kits for SONY’s top feature film projects.

Matthew went on to write and direct another award-winning short, “A Package for Me,” starring Wendie Jo Sperber and David Leisure. That film won him best short film at the Beverly Hills Film Festival and was invited to Palm Springs and festivals across the world. He also directed, “Fellowship of the Dice,” a mocumentary feature starring Aimee Graham.

Throughout his career, he has been represented by principal agencies in the business including Paradigm and Abrams Artists. Today, Matthew is busy writing and developing feature films and television series.

Below are some of his career highlights and credits.

Credited as Producer and Director.

Credited as Writer, Producer, and Director.

A Package for Me (AON Films/D Squared Productions, 2002)

Credited as Writer, Director, and Editor.

Credited as Editor for the original music video for the band Dumfinger.

Credited as Producer and Director.

Supervised editing for this reality video series of The Hardy Boys Wrestling Team.

Credited as Editor on this reality TV pilot. FCP4.

Credited as Director and Editor for series pilot

and all trailers and presentations.